my baby + me.. through pregnancy, birth and beyond 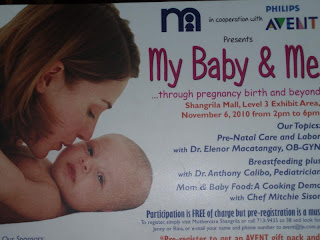 i made it to the my baby and me – through pregnancy, birth and beyond seminar at shangri-la mall with my little jared in tow and with my new mummy blogger friend, Karen and her lovely daughter, Kat.
it was an afternoon of stimulating talk on prenatal care and labor and i particularly liked the second one on breastfeeding plus. Dr. Anthony Calibo was so adept in explaining the rights of pregnant women during delivery and the importance of breastfeeding for mothers and babies alike. i regret that i was not able to attend this seminar before i gave birth, probably, equipped with knowledge on breastfeeding and the know-how on birthing procedures to induce lactation, i would have been successful in breastfeeding my baby. 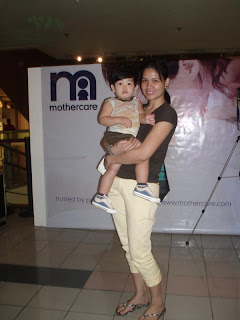 i learned about the benefits of early skin-to-skin contact post partum as i read the book i bought on breastfeeding after i gave birth (i bought the book a day before i gave birth and was not able to browse thru it as my waterbag broke 5am of the next morning). with the proper knowledge, it would have saved me all the frustration and the heartache i experienced while trying to nurse my baby.  see he’d been accustomed to bottle feeding the day he came out, that introducing my nipple might have caused confusion on him. he just wouldn’t latch and i would always end up pleading that he take even just a little of my milk and feeding him formula in the end as he simply refused to breastfeed.
healthy recipes were whipped up by chef mitchie sison. i loved the salad sampler and the baby food she made, yummy and healthy too. prizes and surprises are also given away and though i did not win any of the raffles i went home with an avent feeding bottle and a via cup as well as other freebies and a sunnex ecobag.
more seminars like this from mothercare and avent are slated in the future, so be sure to stay tuned as i will announce it here as soon as i caught wind.

Note: photo credits go to mummy karen, thanks ever so much!

kids in doodles: learning about shapes