mums and tubs baby care club year end get together 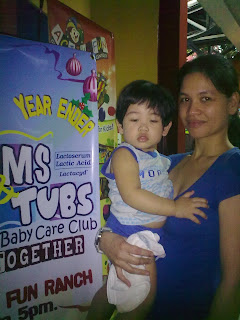 we attended lactacyd’s mums and tubs baby care club year-end get together on december 10, at funranch. i had no idea where that is and was only glad that my blogger friend, vance, agreed to fetch us from cubao.
registration starts at exactly 1pm  and for a change i was one of the early birds to arrive (lucky me cause when the party ends i got to have a free admission ticket to ark avilon zoo. it really pays to be early so the next time i attend a blogging event, i’ll make sure to arrive on the dot! *wink*). we had our photos taken with santa and
later next to the duckie at the stork studio photo booth (which unfortunately, i don’t have a soft copy, but will be posting as soon as i have the actual image scanned).
another favorite mummy blogger friend of mine, karen, attended with her family and another mummy friend.
the event was hosted by patricia bermudez-hizon, wife of the famed cager, and one of our personal favorites, vince hizon (that’s why even tita cel jumped at the opportunity to have our photos taken)
the event kicked-off with a warm rendition of popular christmas carols by the gawad kalinga tatalon choir. after which, the festivities begun with lots of fun games for kids and the kids-at-heart. it was really a bonding moment for mums and their kids, and of course, let us not leave out the dads (the dad-and-kid make a snowman contest is way too cute!).
jared and mum also joined the candy cane relay, a game for the 1-year old to three-year old babies. unfortunately, jared had a change of heart about us joining, he decided to opt out of the relay so mummy has to carry him instead to finish the race. too bad, we lost to the other team, but it’s okay for our first game joined ever! we even got to bring the cute duckie stuff toy!
when the participants got hungry, we were treated to a sumptuous mirienda meal comprised of yummy spaghetti, corn, delish pork barbeque and dirty ice cream (nom, nom!)
more prizes are given away as the event progressed. special citations to the friendliest and most active kids. the winner for the mums and tubs cutie baby contest was also awarded during the program. a big and small co. gc worth Php3000.00 was also up for grabs to the winner of the claus bingo!
the event was capped by doling out loots for the kids by no less than santa himself. the goody, free rides for the kids at funranch!yay!
jared and mum wasted no time and see for ourselves what funranch has to offer, and yes, jared’s very first theme park rides…
it was an enjoyable event and i’ll be sure to attend future mums and tubs events. even tita cel agreed to accompany us, as long as the event falls on weekends!yipee:)
thanks lactacyd and to mums and tubs baby care club!

meet me on monday – 28th edition

music monday – Everything by lifehouse