27.01.2011 No Comments
for christmas 2010 we decided to start a new family tradition of spending christmas day out and agreed to go to enchanted kingdom for our starters. we will be going with our cousin, dennis (jared’s godfather).
we woke up surprisingly early on the morning of 25th (considering we slept a bit late because of noche buena the night before). but even so, we were still late for the agreed departure time, what with preparations and all, and adding the hassle that is commuting on the biggest holiday of the year (which i do not want to relive here) to the fray! to cut the story short, we arrived in laguna a little before 4pm, dazed, frazzled, worn out and in my case, famished (i do not know what is with me and eating this days, i eat like an avid – maybe i’ll write a separate post on this)!
as expected, the theme park is packed today, with all the families taking advantage of the holidays from work and the off time from schools or the ex-pat aunt/uncle arriving from the states after so many years. needless to say, the day was spent plowing through lines upon lines since the moment we sent foot outside the park’s entrance. 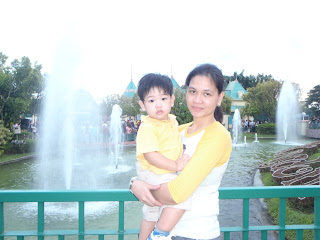 the theme park experience
for the entrance fee, i was contemplating on getting either a regular day pass (at P500 holiday rate, ride-all-you-can ticket) or the carousel special (at P150, includes free admission to the park grounds and unlimited access to the Grand Carousel, Bumbling Boulders, and Boulderville Express) since i will only be riding the ones where jared are allowed. they also have a junior day pass for chidlren 36-47 inches tall (at P320, with unlimited rides to all of the park’s ride). i decided on getting a ride-all-you-can tab in the end, and thought of passing jared to one my siblings when i feel the urge to ride the space shuttle perhaps:)
first destination for a mum with a baby whose been out for almost 6 hours now is the loo for the much needed diaper change and i was much relieved to find no long lines in the bathroom. the downside though is that they do not have these portable diaper changing pads (like the ones in malls) and i had to lay jared on the marble-topped counter which, of course, he despised that i have to change his diaper while he stands, quite a daunting job if you ask me!
now getting into the rides are probably the most time-and-energy-consuming task of the day, not to mention frustrating and irritating. apart from the very long queues, some rides even require you to pile up for an hour or two to take your turn. now imagine standing in a queue for an hour with a 14-kilo baby in your arms! i know right?! 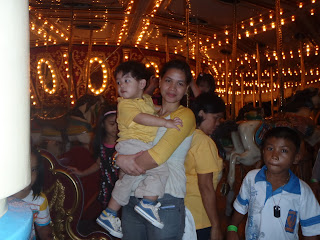 the first in our itinerary is the grand carousel, which turned out to be one of the too few rides we were able enjoy. i was wondering if jared will enjoy this horsey ride. he’s had his first carousel ride not long ago and he had a grand time so i was betting he will enjoy it this time around. bu i think my little man was a little exhausted from the long journey and is stressed with all the noise, people and activities around him, that mid-way through the ride he was dismounting his horsey and i struggled to keep him still and we were the first to leave once the ride halted. 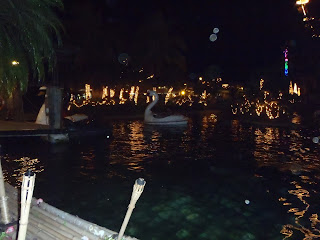 the next ride we queued for, with tito ken in tow, is the swan lake. kids have to be 33inches above to be allowed to ride, and jared easily passed that requirement. it will take us 1 hour to get to the start of the line, so says the sign at the beginning of the queue. because i really loved for jared to ride this, he will be delighted by the floating giant swan in the lake am sure, we waited for our turn, albeit impatient, only to find out, and much to our dismay we only found out when it was our turn to ride, that i can’t put jared on my lap while we ride, that he has to be sitting in between myself and my brother. i really had reservations about it, see my son is very young to be sitting on his own, strapped or not! and to think we will be sailing across the water while he’s doing it just simply made me decide against it instantly.  so yeah, that is one our off our expedition wasted! it’s only a good thing that while we were in line, fire eaters/dancers performed very near the place and we got a great view!

the last of the rides we’ve managed to enjoy is this dinosaur eggs ride, but i think jared’s a little overwhelmed by the size of this kiddie ferriswheel, he wanted to undo his seatbelt halfway! maybe i should wait a little while longer before we will be riding again…. so we just stroll around after that and took some photos.. 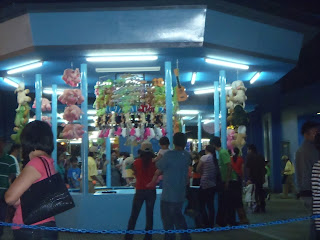 i also tried my hand at some games too and managed to score a little blue crayon from a P50-dart game and little doggie stuff toys for a P50-ring-toss game.

being on my toes for almost 8 hours makes me really hungry, it always does! as i realized it now, i ate three times while in the park, first when we just arrived, before we started riding anything i asked them that we eat  because i was really hungry..all in all, i ate a hotdog sandwich + a large cup of iced tea, 2 slices of pizza and a bottle of mineral water, and dinner comprised of 1 cup of rice, a stick of pork barbeque and a bowl of soup plus a large glass of iced tea! i spent about P700 on my meals alone! enormous appetite right? if you have the same appetite i suggest you bring a few extra moolah, food here don’t come cheap. some people would  actually bring snacks and packed lunch and will opt to eat in their cars instead.

and since i can’t join the other adults in the other rides like the space shuttle, the ferriswheel (which i’ve managed to ride with ken, right before the park closes, same with anchor’s away!), the flying fiesta (which is my favorite ride aside from the grand carousel) i just ambled through the park with my son and checked out the souvenir shops. i was careful not to splurge since i might end up buying stuffs i won’t be needing which is really way to bad for my budget. i bought a strawed tumbler for jared (which he personally chose) and a cute purple neck strap for my brand new digicam. my only regret is that i forgot i will be seeing my friends the day after and was not able to buy them any mementos from the place. too bad, really!

we took photos from all over the place and saw the fireworks (which i think jumpstarted jared’s fascination of fireworks altogether) too!
we didn’t leave until the theme park closed and i must say it was a worthwhile experience, tiring yet utterly enjoyable, i know even my son enjoyed it and for that i gave it my two thumbs up!  it is something we all love to do again, in fact my sisters are requesting we go back on jared’s birthday. hmm.. i guess am gonna have to think about it!

an open letter to brandon boyd