Kids In Doodles, out + about

kids in doodles time again girls + boys + before anything else, allow me to send virtual shout outs to our lone participant for last week’s editions:

1. read on as maithankfulheart recall the beautiful memories of 2012 + welcome the new year 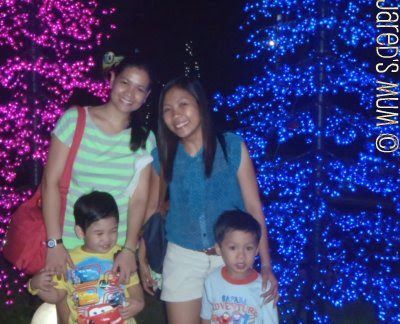 the holidays is simply the most colorful + festive season of the year + i perfectly understood why we can’t get enough of it, even when it has been a week already. so this is my sort of last hooray for the holidays. we never really get to look around + hunt for santa as mum originally planned as i was a bit ill during that weekend leading to christmas with a mild case of colds + coughs. my mum even decided to bring me to my pedia just to be sure am not suffering from anything serious. it was a relieve to find out that there is really nothing to worry about. it was also probably the reason why mum did not force me to take down the medicine my doctor prescribed 😉

so these are truly the only photos we had of the season. the first one was taken in front of the huge christmas tree in cubao when we watched disney on ice, a day after christmas. i have yet to post about it. the second photo was taken when i had my playdate with my pal, rylan. we managed to look around a bit + snap some shots of the colorful outdoor park just outside the packed shopping mall.

this last photo was also taken the same day. we were just strolling around the mall in between destinations + mum spotted this santa claus in one of my fave fast foods. tita moi snapped it, but i guess i was rather preoccupied with other things that i was not looking at the camera!

am sure you’ve got better photos than i did so it is time for you to share those doodles with us. include one of these badges + hop on to the other participants, too, to make our playtime more fun! 🙂

8 Reasons Why Baguio Is The Ultimate City Of Dreams

kids in doodles: all about starfall + a giveaway

kids in doodles: my very own doodle