g is for gnomeo 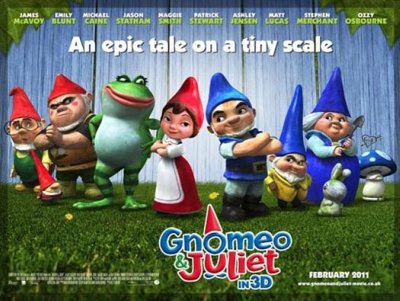 mum downloaded this film a few days back + it is now my current favorite. seen it about 6 times already! ^_^ can you blame me? i find the gnomes rather cute + the catchy songs also added to the charm of this diminutive characters’ big adventure!

mum said the story was based on an old tragedy that was written by someone named shakespeare, she told me to read the book when i grow up, too! for this movie, however, the tragic ending was changed into a better one by ending the age-old fight against the reds {the capulets} + the blues {the montagues} and gnomeo + juliet being together.

added treat was the voice used for juliet’s father was the same one who brought one of my favorite characters, finn mcmissile, to life!

go download a copy if you have not see the film yet, i know you like it as much as i did! 😉

image is from Google.com