n is for my new die cast toy car 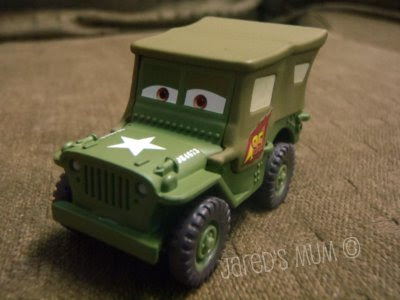 mum + i went to the mall 2 sundays ago + look what mum got me! it is a new die cast car to add to my growing collection of cars from the disney film, cars. this right here is sarge. if you are a fan of the film + its sequel, you will notice that sarge is often seen with the hippie car, fillmore. he runs the sarge’s surplus hut and is a world war II veteran.

here are a few more interesting facts about sarge we found on pixar wiki:

well, i hope you enjoy those tidbits of info about sarge. now, if you will excuse me, it is time to play with him + the rest of the gang! hopefully we can have fillmore in the group real soon! 🙂

kids in doodles:playing with my blue balloon