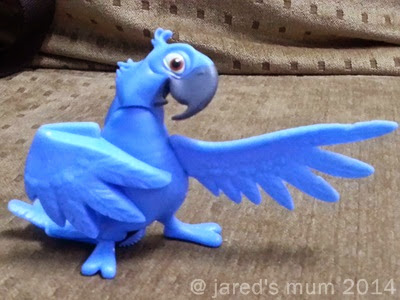 did you watch the last rio movie? then i am sure you all know who blu is! he is the cool blue bird in that film, the main character, who was removed from his natural habitat in rio di janeiro and was fortunately found by his taker linda. blu can do a lot of amazing things like opening a computer, skating, reading but apparently he does not know how to fly.

the first rio movie is all about blu’s adventure when he went back to rio di janeiro to meet with jewel. they were the last of their kind + they were supposed to make baby birds together so there will be more blue macaw in rio. these beautiful birds are being captured and sold overseas at a hefty price.

i have seen the film a few times + i really love it! that is why i am excited to see its sequel which will be shown on local cinemas starting 09 april. will you be watching it, too?

by the way, did you know that they also have free rio2 toys at jollibee? i ate there earlier with mum + my classmates after our swimming class. mum got me two toys, blu + rafael. now am only missing the last one, which is a new character in the film, geri the frog.

my second entry for this year’s #atozchallenge:

kids in doodles: jared + his puzzle