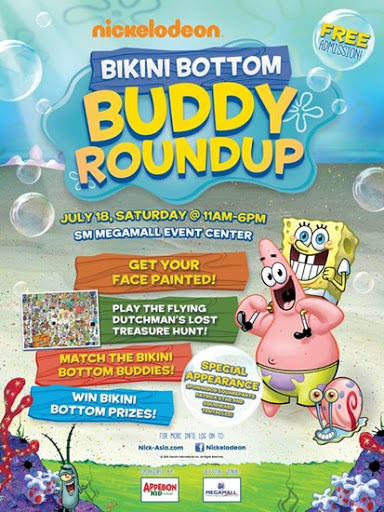 If you love watching Spongebob + his friends, then we have some good news for you! Read on to know more about Nickelodeon’s evening treats on 20-24 July, and the Bikini Bottom Party happening this Saturday, 18 July at SM Megamall!

Kids and kids-at-heart are about to have a lot of underwater fun this July as Nickelodeon treats everyone to a SpongeBob SquarePants spectacular! From July 20-24, tune in to Nickelodeon and enjoy the evening with SpongeBob, Patrick, and the rest of the gang for two whole hours every day, starting at 6:00 pm until 8:00 pm. We know watching our favourite characters from Bikini Bottom get silly and crazy is already such a thrill in itself, but that’s not even half the fun! Every day, the two-hour marathon will feature eight characters from the show. The real excitement begins at the end of the last episode, when you can finally get in on the action. It’s also where it gets tricky, because not only would you have to remember all eight characters you spent the evening with, but you also have to start hunting them down—on your computer! Be sure to catch a quick instruction on TV at the end of the marathon, then go online to play the Ultimate Bikini Bottom Buddy Search. Find the SpongeBob poster image and spot all the eight characters of the day! You might need to borrow dad’s magnifying glasses for this one, because there sure is a big Bikini Bottom party going on in there, and could get pretty crowded in the neighbourhood. By the end of the week, if you were able to find all 40 of SpongeBob’s friends and have managed to clear all five levels of the online game, you’ll a get chance to unlock an exclusive never-before-seen SpongeBob SquarePants episode online! You could also win awesome prizes and get to create your own Bikini Bottom resident. How’s that for an under the sea adventure?

If you have not made any plans for the weekend, here is a great way to spend the afternoon with family and friends:

Now to warm all of you kids up, Nickelodeon is throwing a party, to give you a preview of all the awesome fun that’s about to go down in Bikini Bottom. Get your best friends and head on over to SM Megamall on July 18 for a day of fun and games with the whole SpongeBob barkada! Celebrate friendship and teamwork through a maze of activities you will surely love. Get ready to be teleported under the sea, with a special Bikini Bottom photo wall where you can have your photo taken while you’re “jellyfishing” with SpongeBob. A face painting booth will also be set up so everyone can have their favourite Bikini Bottom character painted on their cheek—talk about clingy! For younger kids who love to jump and bounce, there’s a huge inflatable play area—jump ‘til you drop! It won’t be a Nickelodeon party without exciting games, and it won’t be a SpongeBob SquarePants event without a special SpongeBob SqaurePants episode screening, so brace yourself for extreme fun!

But of course, the highlight of the party will be the Ultimate Bikini Bottom Buddy Search. Find out everything you need to know about the SpongeBob special you’re about to experience at home, and get to have your first try on site! Isn’t that just absolutely sea-rrific? So get your gear and join Nickelodeon on a field trip to Bikini Bottom! See you there!

See you on Saturday and let us party with Spongebob + his friends!

how about winning an iPad for Christmas?