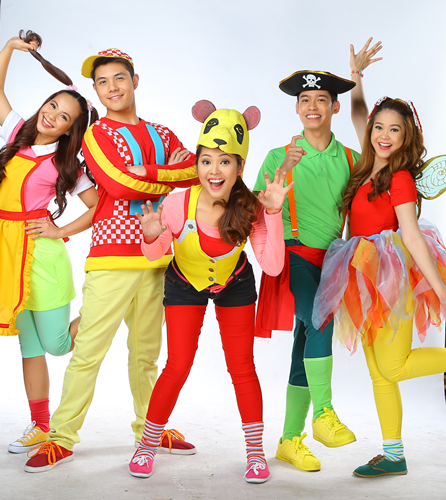 I love watching Hi-5 on the telly + I will never forget meeting all the cast members last year, along with Fely from the Australian version {you can check out mum’s post for details about that awesome day!}. They are up for their second season this year + I will surely catch it whenever I can, especially during weekends or when there is no school on weekdays.

Our friends from Hi-5 Philippines shares the following press release on what to look forward to this season, read on:

After debuting last year as the first and only all-Filipino cast for the local franchise of the award-winning Australian edutainment show, Hi-5 Philippines’ first season has been a one-of-a-kind ride for the cast and its young viewers. Philippine television witnessed the birth of the edutainment program of this generation, and the new icons of today’s youngsters in its maiden season.

And a new round of catchy songs, exhilarating dances and learning adventures await fans as the show returns for a second season. The vibrant gang of Hi-5 Philippines, composed of Fred, Rissey, Aira, Alex and Gerard, is sure to captivate kids and kids-at-heart once more with their irresistible charm, especially now that they’ve learned the ropes and have more to bring to the table.

The cast took time to reminisce about experiences during the show’s first run, look back at how much they’ve grown, and share their thrill for the new season. The group revealed that they have just as much fun as their viewers when doing the show.

“My segments usually involve food and eating. One time, I had to eat bread and jam. It took several takes, that when our director requested for another one, I had to take a break because I ended up finishing the loaf, and was too full already,” Aira fondly recalls.

Meanwhile, Rissey reveals what an amusing challenge her Body Move segment is, with her mimicking different animals during storytelling. “I’ve been all kinds of animals already that I feel like I can create a ‘Rissey Zoo’ now,” she said.

However challenging, everyone recognizes how Hi-5 contributed to their growth as performers and as individuals. “It really stretched us as performers. The role requires being childlike, and doing this really helped me get in touch with the child within me,” Rissey said.

“The bonding sessions with the group are the best thing about the first season for me. Clinging to each other through all the tapings and shows, and just doing everything else together was definitely unforgettable,” said Fred, adding that that made a huge contribution to them becoming more comfortable with their roles.

“Being part of Hi-5 requires presenting a heightened version of ourselves. And in the course of doing that, we somehow embody our roles that it’s no longer just a character, it becomes us,” Gerard said.

They also recognized and acknowledged how amazing it is to be a role model that kids look up to. Although they admitted that being a role model comes with a great deal of responsibility as well.

“It’s a lot of pressure to be a good role model to kids but it also gives you a really good feeling. A kind of warm rushing light fills you especially when you get feedback from the kids on how much impact you’re making in their lives,” Alex shared.

They said that the positive reception that they get from kids and parents during their live shows, in schools and malls, is overwhelming and very fulfilling.

“It’s the best feeling when a kid comes up to us and tells us that we are their inspiration, or that they always look forward to watching our show,” Aira said. Gerard added that interacting with the kids in their live shows is when they feel most acknowledged for what they do.

In this regard, the Hi-5 barkada cannot contain their excitement for the new season. They’ll be bringing their learnings from season one and are hoping that fans will show them more love.

“We hope everybody tunes in to Hi-5 Season 2 and see how much we’ve grown together. They can expect new songs and new adventures, as well as more of the good kind of craziness with the gang,” Rissey said. Fred spills that long-awaited songs will be part of season 2, including the group’s personal favorite “Wish Upon a Star.”

Join Fred, Rissey, Aira, Alex and Gerard for another Hi-5 season of fun, singing, dancing and active learning beginning February 22. Hi-5 airs Monday through Friday at 8:30 a.m., Saturday at 9:30am and Sunday at 9:00 am, only on TV5.

a trip to the grocers