mum + i, my favorite things 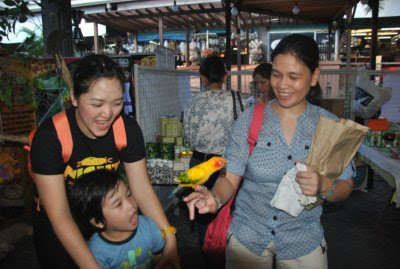 i know i’ve just mentioned pets on my recent kids in doodles post, but did i tell you that it wasn’t only me who enjoyed petting + holding the colorful parrot? mum also had a wonderful time doing exactly that. she won’t be beaten + held the bird, too. + i bet you can tell from the photos, right? 😉

the parrot’s claws might hurt a bit, but it was all tingly and ticklish for the most part so we really enjoyed holding it. it was a good thing it shares the same feeling, otherwise it might’ve bitten us or something! 😀 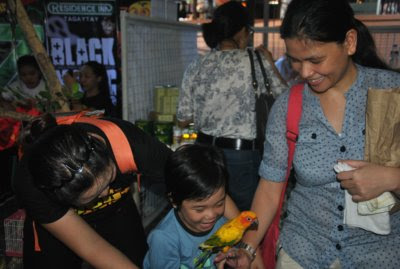 it was the first time we experienced parrots first-hand + i must say it was one of the best things we ever did. birds and animals in general are simply fun + enjoyable to be around. i would love to see + bond with more of them in the future, i cannot wait for our trip to the zoo. mum has been planning that for a while now, but we do not have any concrete plans yet. i just hope we’d be able to visit one before the year ends!

Zoomanity Group was kind enough to email mum the photos they took of us during the Junior Prenuer event, so shout outs to you guys + thanks! 🙂

am linking the colorful parrot with: 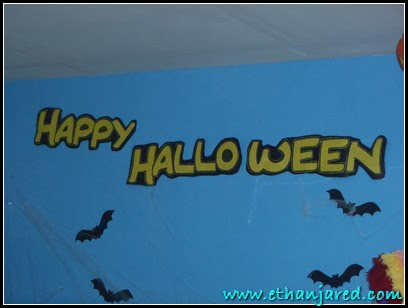 although I skip on a scary costume again this year, it does not make my halloween less colorful or fun. i still managed to go out + had fun with other kids in our trick or treat {check out my post here} adventure.

apart from that I also managed to have some photos taken with some colorful clowns, just like in this photo here: 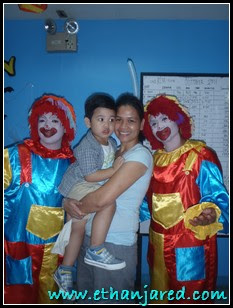 i also went home with loads of these colorful treats! 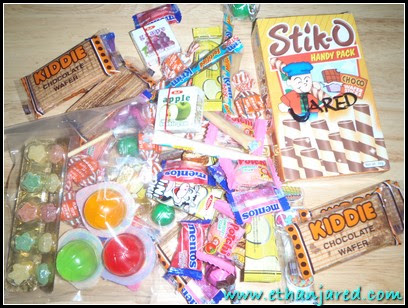 all in all, it was a great halloween celebration + i look forward to another trick or treat {+ maybe, a costume or two!} next year! 🙂

i hope your halloween is as colorful as mine! happy halloween! 🙂

mum + i, my favorite things

strolling at the park

i wish it was an actual park, but we have yet to visit a nearby park on a free afternoon + this one is actually the outdoor park of the mall we went to last week to have my hair cut. after we got tired of all the rushing people inside the mall, we went out to the uncovered mini park to walk a bit more + see the greenery there. too bad the fountain + the mini pond is being cleaned that day so i was not able to see jets of water or any  fish swimming around. maybe it will all be up + running the next time we visit.

apart from strolling, we also ate at one of mum’s favorite place. i only had a few spoonfuls of the japanese rice + mango shake she ordered since i am too busy wanting to walk around, with mum + dad chasing after me.

we also hopped from one shop after another, not really buying much but just window shopping. mum wanted to get me something for halloween but did not find any costume that she think i’d wear, so it left me with nothing to wear for thursday’s trick or treat at tita cel’s office. we also marvel at the lovely christmas decorations + trees that are on display this early.

too bad we do not have much photos taken. i guess i was such a handful that mum + dad really has no time for anything else. oh well, maybe we’d take more pictures on our next family time ;D

a kiss caught on cam!

one of the things i’d love to do is give my mum a random kiss + catch her by surprise. she loves it much, i tell you! i do it out of the blue + she’d be totally clueless, she’ll be caught off-guard…i love giving mum surprises + see her reaction. 😀

this is one of those rare occasions when they catch me giving mum a kiss on cam, we were all by ourselves most of the time, that when i threw her a kiss, no one else is around to capture it for posterity. we were out in the mall back then + i was being playful + all + kissed mum all of a sudden. glad my tito-ninong dennis was able to get a snapshot! read about our weekend adventure here.

have you been giving your mum random kisses lately? tell! 😉

a great week ahead

hello again everyone! it’s the start of another week + i am wishing you will have a great one ahead…

last week was sort of busy in our end. mum has to leave on tuesday + friday for some events she has to attend + left me to my tito ken’s care. she went home quite late that the moment she arrived i was on my way to dreamland.

on thursday, though, mum made up for her absences + brought me to activefun (it was my third time to go there, but it did not make the experience less fun!). we played there for several hours + i really enjoyed it. i will post some of the photos in a while. mum was suppose to go to this tribute party for her favorite band, incubus, but decided against it + played with me instead. i can’t wait to share the stories with you, but that can wait till the next post…

on sunday, we are off again, to sm city north edsa again, but this time, mum watched the harry potter movie. tito dennis, mum’s cousin who happens to be my ninong too, joined us that afternoon. i can’t go with them to the cinema, though, since i am not old enough, plus voldemort does give me the creeps. one scary chap that one is, if you ask me!

we ate in kenny rogers first before mum left for the cinema (see the photo above). i simply love their chicken soup + i’d always eat a lot whenever we go there. i also enjoyed the iced tea, but mum made sure to give me just a little sip of it, just so i can taste it.

it was tita cecille who looked after me when mum left to watch the film. we just roamed around the mall, which was packed with people at the time, since there is a mall-wide sale going on. after several hours of roaming around, i was really tired + sleepy (check out my 2nd photo).

the grown ups did a little shopping while i admired the letters “e” displayed in one of the shop’s windows. mum bought some stuffs including an orange shirt for me (which i shall be posting here soon).

it was a tiring but enjoyable day + i look forward to our next adventure!

so how was your weekend? i hope you had a great one 😉