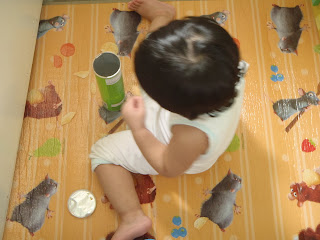 it is messy go-round once again + am sharing you these photos of myself messing around + making a mess  with my new-found favorite, pringles. i simple love its taste, especially the original one. mum makes me eat them since they are not that salty compared to the other variants. it became my instant favorite + i’d love it the first time i tasted it 😉 the photo above is a top-view of my mess + the one down there is one clear proof that i am simple loving these goodies. i can’t wait to eat again, maybe i’d ask mum to buy some again the next time we go the grocers 😉 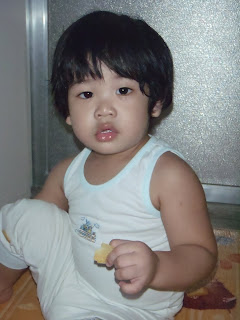 17.04.2011 No Comments
here are a few of my son’s first birthday photos. i had my bro, ken, design this layout for a photobook i ordered from artscow a some months back (i made a separate post about it here).
i wanted my son’s birthday to be simple yet very memorable, it was his very first in the first place + i was very excited preparing for it. we had a simple celebration in a jollibee branch nearby. we invited my closest friends, jared’s god parents (some were not able to come since we live in a far off place) and some family friends + neighbors. we had games for both kids + adults + everyone had lots of fun. all the hard work + the penny spent paid off, especially when i saw my son’s reaction to the jollibee mascot – priceless!
am looking forward to my son’s 2nd birthday several months from now…

this is my late entry to this week’s

click on the badge for more birthday photos. happy weekend everyone!

my son has been passing very soft, and sometimes watery, stool since saturday last. he would also do it twice or three times a day, much to my worries. apart from giving him uncomfortable feeling or stomach upset perhaps, i am worried his diaper area will get rashes + get irritated due to frequent washing + diaper changing too!
at first, i thought it was due to his medicine (see he recently suffered from colds + had to take some medication, including an antihistamine since his pedia is suspecting his colds is due to allergies) so no cause to worry really + i am just being my normal mommy mode. but then several days passed with no improvement + the other day he went three times. now for someone who’s been eating a lot in a day, it would probably be normal + i can easily dismiss it, but my son rarely eats his solids but would consume 7 ounce of milk every 2 hours or so.
yesterday i sent a text to his pedia raising my concerns + she acquiesced to have my son stool examined just so we know what the real problem is. observing my son, i don’t think he is anyway near to being dehydrated, his bowel movements aren’t accompanied by fever or vomiting either so that also rules out viral or bacterial infections.
we will have his stool checked later, i only hope it turned out negative. i hope this is only due to jared’s habit of putting everything he sees in his mouth + nothing more. please pray for us, thanks. 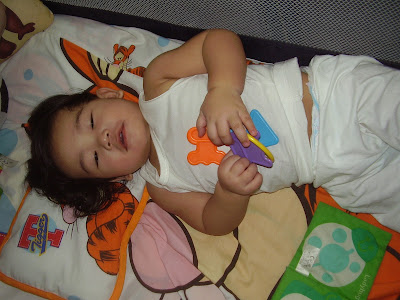 i never imagined looking for a photo of my son with orange can be such a chore, i guess it wasn’t really one of  my favorite color for him to wear (he doesn’t have anything orange clothes!) so i was glad when i stumbled upon this old photo of him (a few months old with too few teeth still), with his orange rattle and orange tigger pillow, bolster + comforter (a gift from his ninang chris for his baptism)! hooray, orange!
my entry to this weeks:

my once-little-bundle-of-joy-now-turned-tumbling-tot is growing way to fast + has just turned 18 months wednesday. curious + eager to see the world past the four corners of his crib/playpen and beyond the confines of his room, he would almost always dash to the door, with his slippers in either hand, raring to go out. he would slip past me most of the time + go out with unshod feet.

what the little tot is up to:

how time flies, has it really been 18 months? felt like it was only yesterday when i gave birth to a bouncing 8.3-pound baby boy! happy 18th month son, here’s to so much more! mum + dad loves you!