off the shelf: where is brainy?

Here is another one of my favorite books that I would like to tell you about. Mum got me this pre-loved Smurfs book from one her Facebook groups late last year. I was on a Smurfs-mania that time and was watching the Smurfs movies one after another. I was also playing with my Smurfs Happy Meal toys then.

Where Is Brainy? is a book filled with pictures that are filled with the cute and blue smurfs + their everyday adventures + misadventures. In each picture, the readers should locate the whereabouts of one famous Smurfs character, Brainy. He is easier to spot that most of Papa Smurfs children because he is wearing a pair of glasses. You will more often see Brainy’s head buried in a book or busy reading in his hut. Some photos also feature the Smurf’s enemy, the bad wizard, Gargamel.

There is also a summary of all the lovable Smurfs characters as shown in this photo.

off the shelf: ang barumbadong bus

Hi there, it has been awhile since you heard from me. Things are a tad busy at home with mum doing a gazillion of things and this school boy, busy with school work and other stuff.

One of the many things I would like to share with you are my favorite things, so today I am talking about one of my favorite books ~ Ang Barumbadong Bus.

Here’s a brief summary found at the back of the book:

This story is about a temperamental bus called Kas, who wants to drive fast in the street, passed the many other cars and vehicles, whom he bullied as he zoomed by. This bus only cares for himself and does not care whether he hurt the other vehicles as he passed them by. Even his passengers are afraid of him because he is known to race in the street and to speed on without waiting for the passengers to fully exit his bus.

Off The Shelf: Disney Planes

Mum + I were off to the mall one afternoon after school for some errands when I asked if we can drop at the toy section. No mall visit was ever complete without dropping by this part of the mall. No, I do not buy toys all the time, but I enjoy browsing through the display of latest toys and spend time checking for my favorites, like die-cast cars, action figures, among others.

While doing her own browsing mum stumbled into these books that are up at discounted price that day. Planes is one of my favorite films, so we opted for this Disney Planes book, which we got for half the original price! A great deal, right?

This book tells the story of the first Disney Planes film. It introduces us to a crop duster, Dusty Crophopper, who has big dreams of joining the Wings Across the Globe race. Many people laughed at his seemingly impossible dream but Dusty never gave up. He joined the qualifying rounds but failed to make the cut, but one stroke of luck got him in the race and went on to race around the globe along with his idol, Ripslinger, and popular racers like El Chupacabra, Ishani, Bulldog, + Rochelle. With the help of his friends, Chug + Dotty, and his mentor, Skipper, Dusty went on to win the championship to prove that anyone who does not give up on their dreams is bound to achieve them one day.

Planes is a spin-off of another popular Disney franchise, Cars, which is my most favorite! A sequel to the first film was also shown not too long ago, it was called Disney: Fire and Rescue.

Reading about one of my favorite films is such a great way to pass the time. This is my current bedtime read. What is yours? 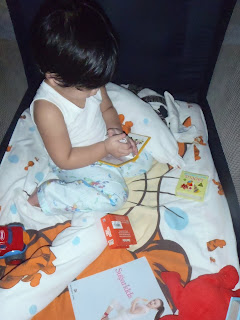 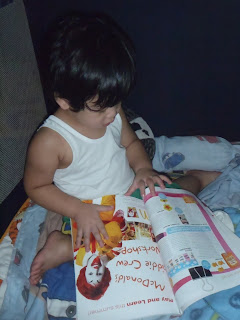 one of the things that i enjoy doing is reading. i’d stare at the photos in my books, point to them + sometimes, i even pretend i could read them 😉

it was something i got from my mum. she has been reading to me in utero + would always read the book the land before time (a tale of a baby dinosaur named littlefoot + his adventures with his friends, cera, spike, + ducky) before we dose off to dreamland.

one of my most favorite book is a boardbook mum got me with photos of cars, trains + airplanes. i just love it!

this is our entry to this week’s (do click on the badge to see more kids in doodles) :