from my mailbox: 3d panda postcard from japan 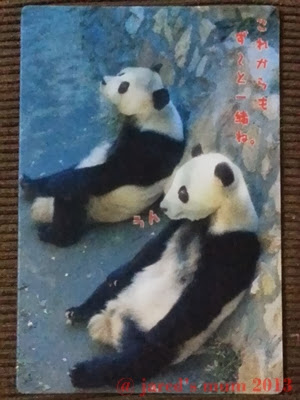 pandas are really adorable animals + i would really want to see them in person one day. but in the meantime, i guess this 3d panda postcard i got from japan is just as wonderful. aren’t they lovely? the 2 panda heads move up + down when i shake the card + i find that amazing + entertaining, too! 🙂 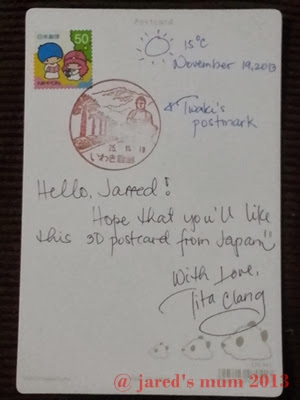 this card was sent by tita clang, one of mum’s friends who love postcrossing! thank you for sending this to me, i really love it. apart from the card, the iwaki postmark is also beautiful. mum adore the twin stars stamp you included! ^_^

off to school we go 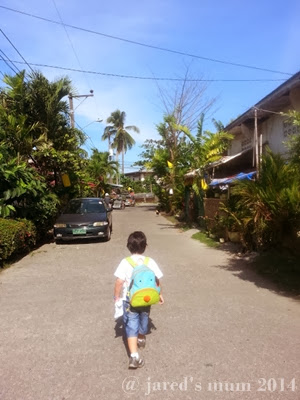 mum + i have a new routine now that i am back to attending playschool. i have classes 3x a week + mum + i would wake up real early so we’ll have enough time to prepare before we leave. after we ate breakfast, bathed and watched a little telly, it is off to school we go.

i look forward to each time we head out the door + have that morning walk before we go to school. i make sure i beat mum to the door + be the first one out of the gates, too! of course, mum would always try to stop me + grab my hand since it is not safe for toddlers like me to be roaming out the streets on our own. she made sure to remind me every single time to stay close to her and hold her hand.

but i am just glad there is this portion of our walk when i can freely walk on my own + check out the neighborhood. mum took a snap of one of those walks. what do you think? 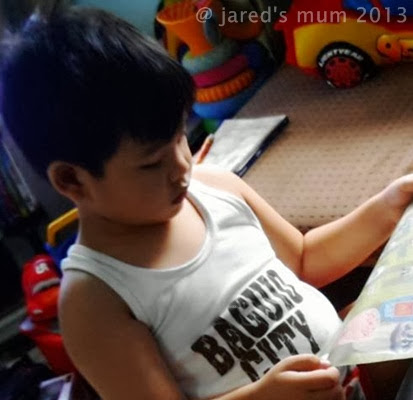 Ever since I was an infant, mum made it a point to clothe me in white, she said she finds those infant tie-side shirts and those itsy bitsy little booties and mittens look so much better in white. Mum also bought me a couple of dozens of cloth diapers, which was later on used as bibs, instead, and those were my favorites and I never go out of the house without one of them. Apart from those white cloth diapers, mum also made it a habit to buy me white shorts and sandos {sleeveless undershirt}, like the one am wearing on the photo, for example, which mum bought when we went to Baguio about 2 years ago, as they are the comfiest to wear, especially when I am just at home and the weather is sweltering, I perspire too much, you see.

Those sandos that mum bought are mostly a size or two bigger than me so that I can get to wear them longer, probably for a few months more or even a year, but due to the wear and tear of regular use, those white sandos are mostly grayish and worn. Mum does not have the heart to throw them away while they still fit me so she was hoping to find something that would restore their white color so they would look better than their current state.

I guess that is the reason why mum was excited to stumble upon Perwoll Brilliant White Liquid Detergent at South Supermarket, where we usually go to buy groceries. She said she was wary about using just any detergent on my stuff, but Perwoll won her over because it is safe to use on sensitive skin like mine and promises to be gentle on mum’s hands, too. In addition, this product is also environment-friendly, which earned it another point in my mum’s book.

Perwoll according to mum who made it a point to read the labels, is manufactured by the German company, Henkel, and not only uses the innovative fiber rebonding technology that prevents colors from fading and restore the gray appearing fabric but also has optical brighteners that re-new white colors without using any bleaching agents. This particular variant is most ideal to use on white colored clothes. The manufacturers have also come up with variants that are perfect to use on black, as well as colored, clothes, which I am sure most mums will like.

Kids In Doodles, out + about

time again for another round of kids in doodles + today i will share all about our fun train ride experience. no, i was not talking about a real train like the mrt or the lrt, although i’ve ridden those a number of times already. i am actually referring to those fun + colorful trains that roam around whenever we visit the mall! 🙂

last year, we had the chance to go to eastwood mall in libis + was lucky to be able to ride this cool green train. i guess mum still thinks am too little to ride on my own so she accompanied me on this fun adventure + i guess from the look on this photo mum’s friend, mummy willa, took, you can easily say that i was not the only one who enjoyed the ride, right?

a ride in a cool + colorful train like this is something i’d always enjoy + did i mention mum promised we will ride this one we saw at the local robinsons soon? i simply cannot wait!

okay your turn to share your fascinating doodles with us. share a photo of you riding anything, a horse, a car, a boat, or that awesome-looking ride at tagaytay’s sky ranch, the vikings, which i’d like to try when i am older, anything at all. do not forget to include one our badges + link up! see you around 🙂

We recently did a review on one of Tmart.com‘s items {you may check it out here} + now they want to get more honest opinions from customers, so they are looking for 30 more bloggers to review their hot, new + unique products. Chosen bloggers will get to receive items free of charge in exchange for their honest opinions.

Here are the products available for review:

+ here are the blog requirements:

This will run until the 28th of January + those who have worked for T-mart before need not apply.

If any of your blogs qualified, do not forget to sign up now, right? 🙂